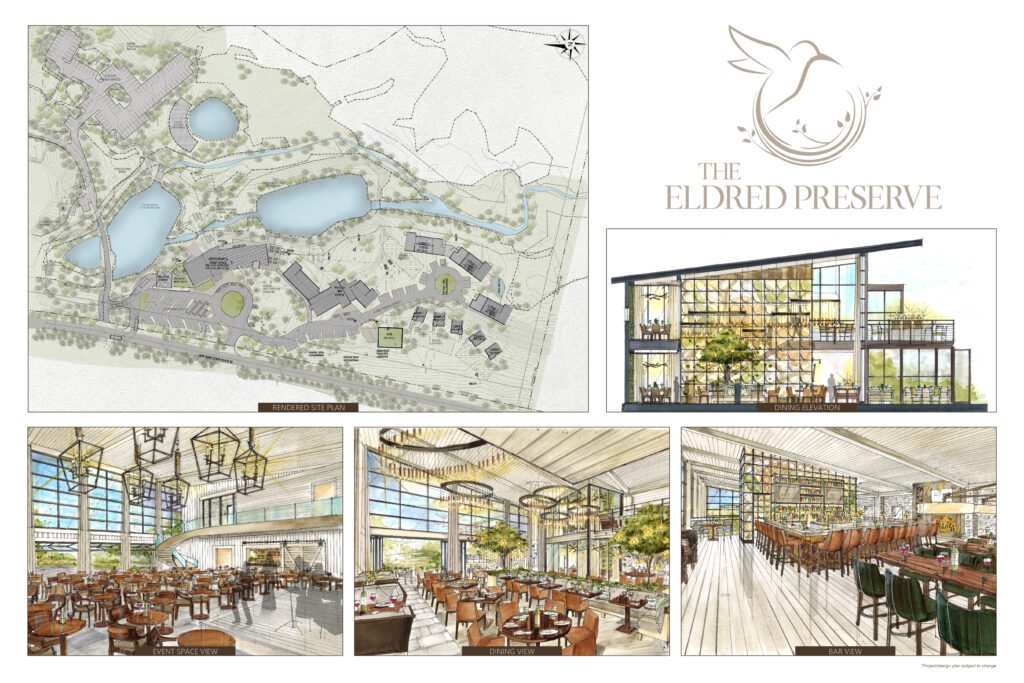 Local resident and entrepreneur Dan Silna and his wife, Joan, have officially announced their plans to reopen The Eldred Preserve, located in the town of Highland of Sullivan County, N.Y. The resort is being completely rebuilt, and is on schedule to celebrate its grand opening in time for the 50th anniversary of the original Woodstock Festival in August 2019.

The Eldred Preserve is a wholly unique hospitality offering in the Sullivan County Catskills that, upon completion, will weave together the best of three Sullivan County legacy brands – The Eldred Preserve, The Bradstan Country Hotel, and The Old Homestead Restaurant. The resort property will include an event space, luxury accommodations, and a classic steakhouse offering a unique farm-to-table experience.

The Eldred Preserve, originally founded in 1967 by Robert H. Abplanalp, was once known as Sullivan County’s premier fishing resort. The 3,000-acre property offered overnight accommodations and a host of outdoor activities, including hunting, world-class fishing, hiking, and target practice. As new owners, the Silnas plan to develop The Eldred Preserve property into an entertainment hub for the local community, as well as a draw for visitors to Sullivan County.

“In addition to the property’s impressive legacy and its pristine location, The Eldred Preserve’s proximity to so many outstanding Sullivan County entertainment options, including Bethel Woods Center for the Arts, Resorts World Catskills, Monticello Motor Club, and the Delaware River Scenic Byway, makes it the ideal location to bring this project to life,” said owner Dan Silna, a well-known pioneer in the textile industry and the former co-owner of the American Basketball Association’s Spirits of St. Louis.

In addition to continuing the longstanding history of The Eldred Preserve, the project will also include two additional legacy brands: The Bradstan Country Hotel and The Old Homestead Restaurant.

The Bradstan Country Hotel, established by Sullivan County Legislator Scott Samuelson and Edward Dudek, has offered elegant accommodations on White Lake in the town of Bethel, for nearly 30 years. Mr. Samuelson and Mr. Dudek have committed to bringing the same level of excellence to The Eldred Preserve’s lodging options, which will adopt the Bradstan’s legacy as part of its own through The Bradstan Boutique Hotel at the Eldred Preserve.

The Bradstan Boutique Hotel at The Eldred Preserve will include an eight-room inn, three five-room lodges, and five stand-alone cabins, for a total of 28 luxury accommodations. Each will feature first-class amenities, linens, and furnishings.

“We are so excited to be a part of this project,” said Mr. Samuelson, who is overseeing the project’s development as its chief operating officer. “The redevelopment of The Eldred Preserve will continue to bring new life, growth, and visitors to the Sullivan County area. We are proud that The Bradstan Country Hotel is a part of this endeavor.”

“We are honored to have The Eldred Preserve breathe new life into The Old Homestead brand,” said Alice Edelman. “For over six decades, our restaurant earned the loyalty of thousands throughout the region and New York City. To have our legacy continue through The Eldred Preserve is an honor.”

The Old Homestead Restaurant + Lounge at The Eldred Preserve will pay homage to the original steakhouse by weaving in a sampling of original menu items, with the addition of a new and significant farm-to-table component. The restaurant will feature both indoor and outdoor seating, as well as on-site live entertainment hosted at the resort’s bar/piano lounge.

In addition to dining and lodging options, The Eldred Preserve Weddings + Events will offer service for hosting a number of special events, with features including a dance floor, performance stage, and full bar service. Additional property amenities will include an on-site fitness center, special events gazebo, vegetable and herb gardens, scenic deck and patio, and firepit seating. Development plans for the full property will include access to three large ponds and an adjoining 600 acres (including a 75-acre lake), hiking, and boating amenities.

“Joan and I share a long-standing love of the Sullivan County Catskills, and we are so grateful to have this opportunity to play a role in the ongoing resurgence and cultural growth of the local area,” said Mr. Silna. “Being able to celebrate our grand opening in time for the 50th anniversary of the Woodstock Festival at the site of the Bethel Woods Center for the Arts just makes the whole experience more exciting for us.”