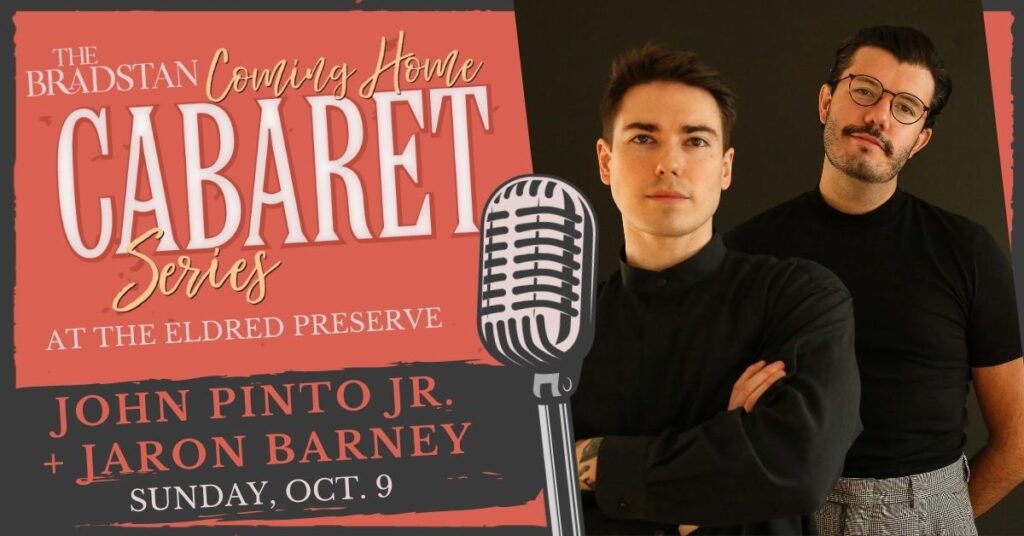 Pinto, a graduate of Delaware Valley High School in Milford, Pa., and Barney performed together for nearly two years after meeting on The Book of Mormon tour in 2017. Pinto still performs with Mormon on Broadway, while Barney cruises the globe performing the songs of the legendary Carole King. The duo is reuniting for one night only for their debut performance at The Eldred Preserve.

“Not only am I performing just a few minutes from where I grew up, but I am also performing in a space that I was able to watch—and help—go from a construction site to the beautiful place it is today,” shared Pinto. “That’s right! During the Broadway shutdown in 2020, I went back home to be with my family, and ended up helping my father install tile at The Eldred Preserve.”

“Now being able to perform there really brings the whole thing full circle, and that’s just so cool,” he added.

Pinto, the recipient of the Roger Sturtevant Musical Theatre Award, has played numerous roles in professional productions, including Bristol Riverside Theatre’s 2009 production of Altar Boyz, the National Tour of South Pacific, McCoy-Rigby Entertainment’s 2015 production of RENT, and of course, his Broadway role as Ensemble and Mormon in The Book of Mormon at the Eugene O’Neill Theatre.

“We are thrilled to be welcoming John and Jaron to our stage for the first time,” said Scott Samuelson, chief operating officer at The Eldred Preserve. “They embody the form of musical theater and talent in the next generation, and we are looking forward to the delightful energy and entertainment they will bring to the audience.”

The Bradstan Coming Home Cabaret Series is a revival of the original Bradstan’s Inn Cabaret Series, which had its final curtain in 2008. The cabaret series, hosted by Samuelson and Eddie Dudek, became an annual tradition that was a favorite amongst tourists and locals alike, including The Eldred Preserve founders Dan and Joan Silna.

Comedians Jeff Norris + John “Gemini” Lombardi will continue the series on Oct. 30, followed by Liz Callaway, and then, finally, Karen Mason’s second performance in the series with “The Christmas Show!”