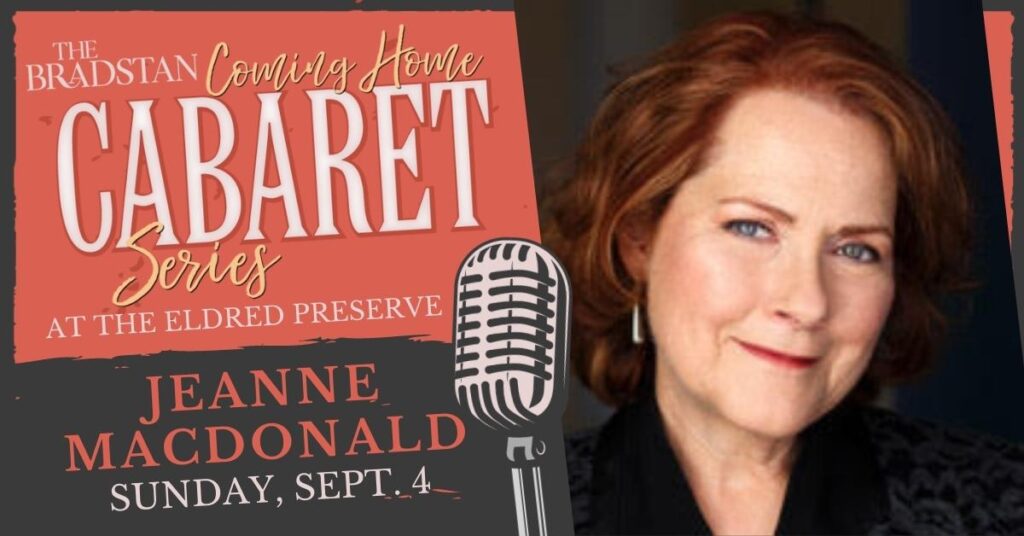 Award-winning vocalist Jeanne MacDonald returns to perform at The Bradstan

ELDRED, N.Y. – August 15, 2022 – Jeanne MacDonald, the Bradstan Country Hotel’s first ever solo performer in 1992, is gracing the stage of the Bradstan Coming Home Cabaret Series on Sunday, Sept. 4 at 8 p.m.

MacDonald has earned a reputation as one of News York’s finest singers in cabaret today, encompassing a wide range of performance styles, including jazz, classical, and musical theater. She developed her artistry at the original Bradstan Country Hotel, where she recorded her hit CD, “Live At The Bradstan.”

Appearing frequently in NYC, MacDonald has performed in venues such as the renowned Oak Room at the Algonquin Hotel, the FireBird Cafe, The Hideaway Room at Helen’s, the Mabel Mercer Foundation’s Annual Cabaret Convention, and regularly on the stage of the beautiful Metropolitan Room in Chelsea.

MacDonald is a decorated performer, she is a 2008 Manhattan Association for Cabarets and Clubs (MAC) Award winner for Female Vocalist, and a 2008 NY Nightlife Award finalist, both of which she also received in 2004. She has earned the Back Stage Bistro Award, the MAC Hanson Award, and in 2005, was presented with the Julie Wilson Award for excellence in cabaret on the stage at Jazz at Lincoln Center.

“I have personally had the pleasure of sharing the stage with Jeanne for over 25 years, and am proud to call her a dear friend,” said Scott Samuelson, the chief operating officer at The Eldred Preserve. “Her performance in the Bradstan Coming Home Cabaret Series truly brings the series full circle, and I am thrilled to bring her talent and stage presence to our guests once again.”

After buying the Bradstan Country Hotel in 1985, Samuelson and Eddie Dudek converted the parlor into a cabaret which opened as a piano bar in 1991. MacDonald was the venue’s first solo performer the following year.

The Bradstan Coming Home Cabaret Series is a revival of the original Bradstan’s Inn Cabaret Series, which had its final curtain in 2008. The cabaret series, hosted by Samuelson and Dudek, became an annual tradition that was a favorite amongst both tourists and locals, including The Eldred Preserve founders Dan and Joan Silna.