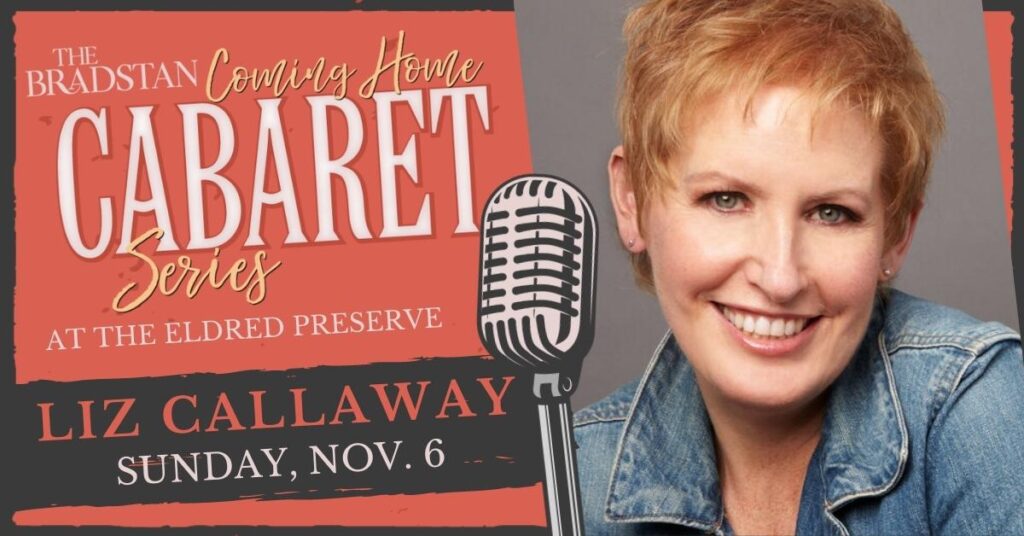 Callaway, who made her Broadway debut in Stephen Sondheim’s Merrily We Roll Along, won acclaim as Grizabella in Cats and received a Tony Award nomination for her performance in Baby. She has also starred in the original casts of Miss Saigon, The Three Musketeers, and The Look of Love.

Her notable accomplishments include singing the Academy Award-nominated song “Journey to the Past” in the animated feature Anastasia and hosting Ready to Go, a daily, live children’s program on CBS in Boston for which she won an Emmy Award.

“Liz is a phenomenal, world-class performer,” said Scott Samuelson, the chief operating officer at The Eldred Preserve. “Our audience is in for a night of tremendous entertainment and we couldn’t be more thrilled for Liz’s return to the Bradstan Cabaret.”

Callaway has released seven solo albums: Passage of Time, The Beat Goes On, The Story Goes On: Liz Callaway On and Off-Broadway, Anywhere I Wander: Liz Callaway Sings Frank Loesser, Merry and Bright, The Essential Liz Callaway, and Comfort and Joy—An Acoustic Christmas. Callaway is set to release her upcoming Sondheim album on Nov. 11, just days after her performance at The Eldred Preserve.

“I performed at the original Bradstan cabaret room many times,” said Callaway. “I’m thrilled they have this new venue.”

The Bradstan Coming Home Cabaret Series is a revival of the original Bradstan’s Inn Cabaret Series, of which Callaway was a frequent performer. Hosted by Samuelson and Eddie Dudek, the cabaret series became an annual tradition that was a favorite amongst both tourists and locals, including The Eldred Preserve founders Dan and Joan Silna.

The 2022 Bradstan Coming Home Cabaret Series will conclude with Karen Mason’s performance of  “The Christmas Show!” on Dec. 11.