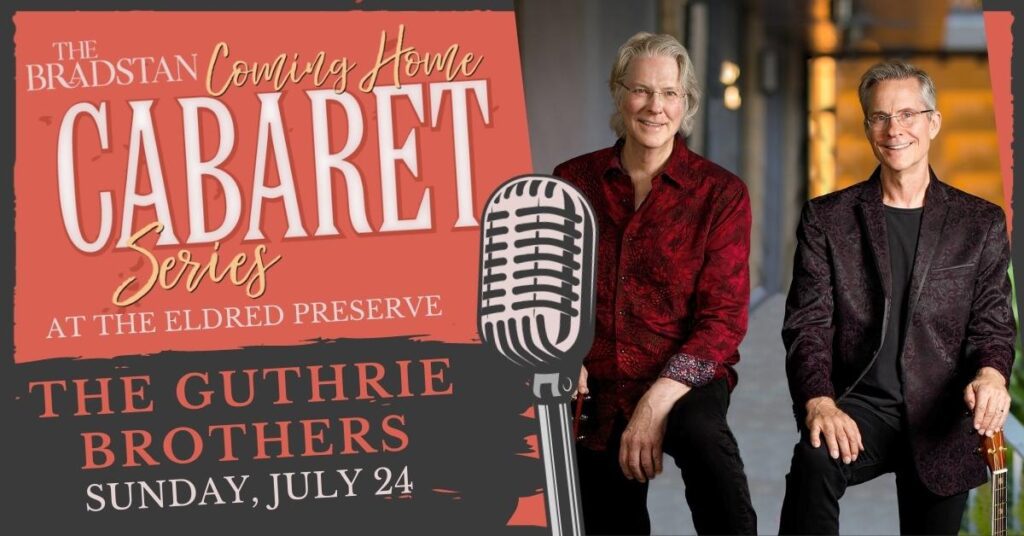 ELDRED, N.Y. – July 6, 2022 – The Guthrie Brothers will continue the Bradstan Coming Home Cabaret Series with their tribute show, “A Simon & Garfunkel Experience” on Sunday, July 24 at 8 p.m. at The Eldred Preserve.

The show pays homage to the iconic duo, Simon & Garfunkel, through songs, stories, trivia, and humor. Guests will enjoy a variety of Simon & Garfunkel favorites, which may include a startlingly authentic rendition of Sound of Silence, a playful version of Cecilia, and many more beloved songs that highlight the brothers’ deep spiritual connection to this music, and to the ‘60s.

“Our voices seemed to blend effortlessly into that S&G signature sound, and the overwhelming audience reaction to our first tribute performance confirmed our feelings,” said Jock Guthrie. “Since that first performance, we’ve worked to perfect our tribute to these two amazing artists.”

The New York-based Guthries’ original music received national attention following the release of their self-titled debut album, which has since been re-released. The brothers, who have been singing together since childhood, have crafted a unique sound due to their natural sibling vocal blend.

“We think this is the reason we can be so faithful to the spirit and sound of whatever period or type of music we’re playing—including our own music. We play together as one,” Jeb Guthrie said.

Over the years, The Guthrie Brothers have been featured on recordings by artists such as John Phillips, Cameo, Felix Cavaliere, and Joe Lynn Turner, and have graced the stage with John Mellencamp, Taj Mahal, Peter Yarrow, Charlie Pride, Joan Osborne, Lisa Loeb, Steve Forbert, Maria Muldaur, Jon Pousette-Dart, Bryan White, and John Berry, among others. Their music was also featured in several episodes of the NBC hit television series Las Vegas and in the feature film “Some Fish Can Fly.”

“The Guthrie Brothers’ unplugged, acoustic style lends well to our resort, which encourages guests to unplug and unwind in nature,” said Scott Samuelson, the chief operating officer at The Eldred Preserve. “We are delighted for them to bring the much-loved music of Simon & Garfunkel to our guests this summer.”

The Bradstan Coming Home Cabaret Series is a revival of the original Bradstan Country Hotel’s Inn Cabaret Series, which enjoyed its final curtain in 2008. The cabaret series, hosted by Samuelson and Eddie Dudek, became an annual tradition that was a favorite amongst both tourists and locals, including The Eldred Preserve founders Dan and Joan Silna.