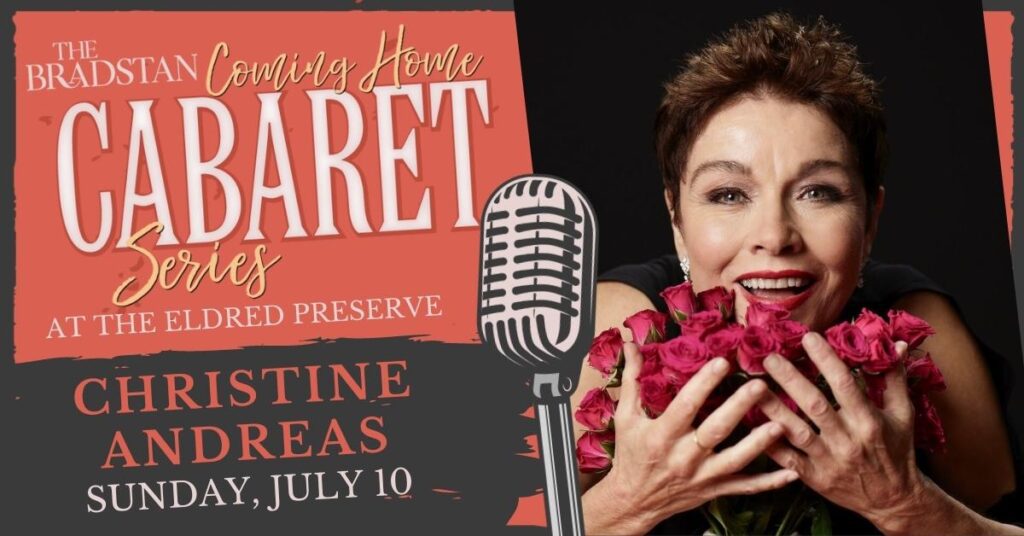 Tony Award-Nominee Christine Andreas to Perform at The Eldred Preserve

Andreas, most-known for her Tony Award-nominated performances in Oklahoma! and On Your Toes, will perform her show AND SO IT GOES… Life & Love, Lost & Found, which Stephen Mosher of Broadway World described as “…one of the most erudite, sophisticated and yet down to earth shows this writer has, yet, seen.”

“If you are finding it a little challenging navigating the current waters of life in our beloved USA….well…so am I,” said Andreas. “To encourage myself, I put together AND SO IT GOES….Life & Love, Lost & Found, a night of soulful and encouraging music that will keep your heart resilient, buoyed and on course.”

Andreas is credited with creating the role of Marguerite St. Just in The Scarlet Pimpernel, and captured theatergoers’ hearts as Eliza Doolittle in the 20th anniversary production of My Fair Lady. In addition, Andreas wowed national audiences in her role of Margaret Johnson in a much-acclaimed national tour of The Light in the Piazza.

“Christine is a truly incredible talent, and we’re honored to have her rejoin the Bradstan Cabaret Series,” said Scott Samuelson, the chief operating officer at The Eldred Preserve. “Her performance will be a gift to our stage, to our guests, and to our beloved cabaret series.”

The Bradstan Coming Home Cabaret Series is a revival of the original Bradstan Country Hotel’s Inn Cabaret Series, which enjoyed its final curtain in 2008. The cabaret series, hosted by Samuelson and Eddie Dudek, became an annual tradition that was a favorite amongst both tourists and locals, including The Eldred Preserve founders Dan and Joan Silna.