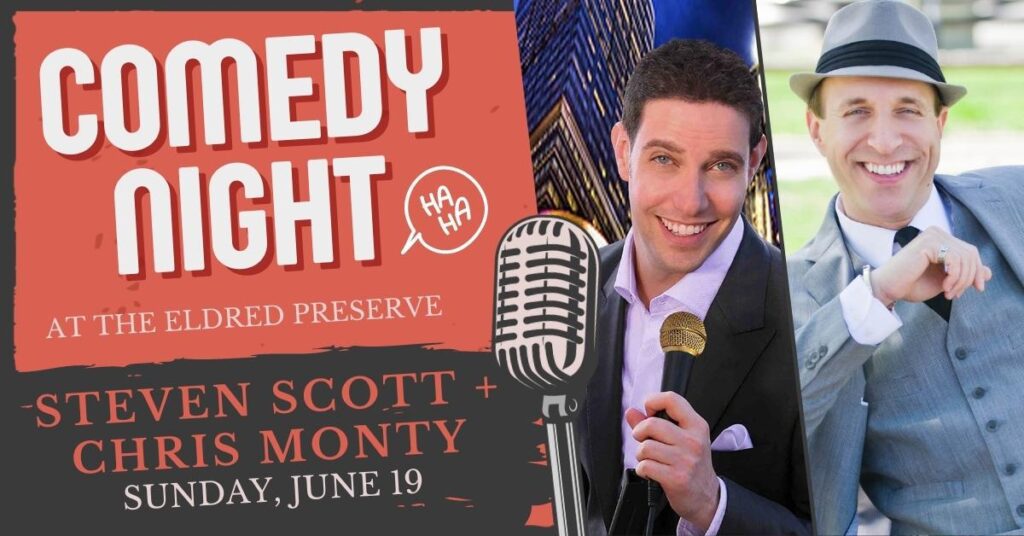 Scott, whose TV appearances include Comedy Central and America’s Got Talent, is often described as a perfect mix between Jerry Seinfeld and Jim Carey. Scott’s comedy combines clever observations of his everyday life with his amazing array of vocal talents. As a comedian, actor, and host, Scott has worked with some of the biggest names in show business on both screen and stages from Broadway to the Las Vegas Strip.

With over 20 years of stand-up comedy and television under his belt, Monty continues to delight audiences worldwide. His stand-up comedy specials “Just Be Happy” (Dry Bar Comedy) and “What’s the Worst That Could Happen” (Amazon Prime) are prime examples of how Monty delivers a cadence that’s reminiscent of the 1960’s cool funnyman mixed with a modern chic that spans generations.

“We’re delighted to bring some much-needed comedic relief to our community after these challenging times,” said Scott Samuelson, the chief operating officer at The Eldred Preserve. “The Eldred Preserve is proud to provide a respite in nature, and Comedy Night will be an extension of that haven.”

The recently-announced Bradstan Coming Home Cabaret Series is a revival of the original Bradstan Country Hotel’s Inn Cabaret Series, which enjoyed its final curtain in 2008. The cabaret series, hosted by Samuelson and Eddie Dudek, became an annual tradition that was a favorite amongst both tourists and locals, including The Eldred Preserve founders Dan and Joan Silna.