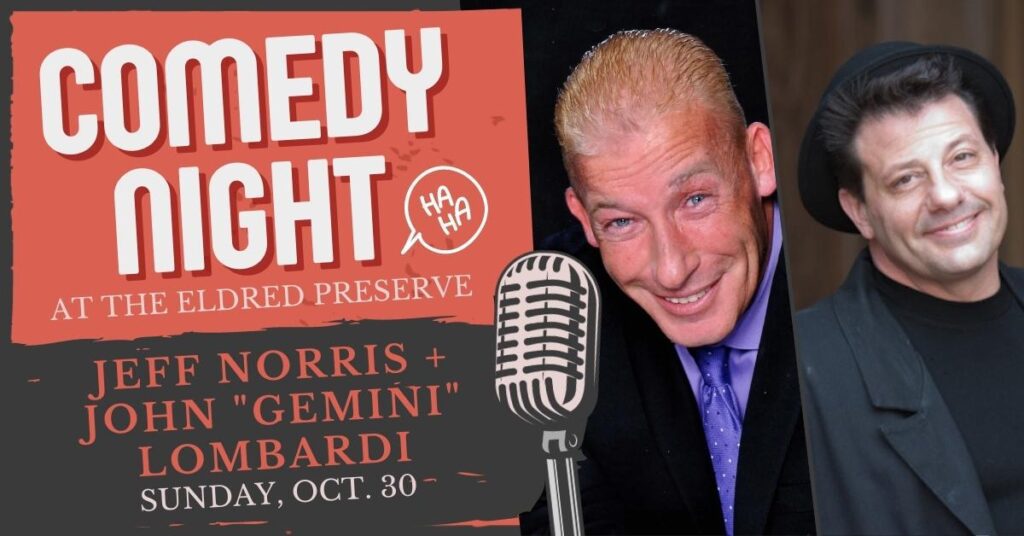 Known for his working-class comedy, Norris has been called “one of the funniest guys out there today” by famed comedian Joe Piscopo. Norris’ repertoire includes stand-up comedy and spot-on impressions, including those of Archie and Edith Bunker, Joe Pesci, Robert DeNiro, Arnold Schwarzenegger, and Jack Nicholson. His television and film credits include HBO’s “Oz” and “Boardwalk Empire,” “My Super Ex Girlfriend,” and “Anger Management.”

Lombardi, a regular on “Good Day New York,”  is an award-winning magician and ventriloquist who has also performed on Fox5, NBC, Showtime, and at hundreds of comedy clubs, casinos, resorts, and theaters nationwide. Voted “#1 Family Act” in the Catskills, his high-energy, interactive entertainment combines comedy, illusions, ventriloquism, and audience participation.

“Jeff Norris and Gemini are bringing their comedic genius to The Eldred Preserve, and we couldn’t be more excited,” said Scott Samuelson, the chief operating officer at The Eldred Preserve. “We are looking forward to the delightful laughter that’s sure to fill our event space during Comedy Night.”

The Bradstan Coming Home Cabaret Series is a revival of the original Bradstan’s Inn Cabaret Series, which had its final curtain in 2008. The cabaret series, hosted by Samuelson and Eddie Dudek, became an annual tradition that was a favorite amongst both tourists and locals, including The Eldred Preserve founders Dan and Joan Silna.

The series continues with award-winning singer and actress Liz Callaway on Nov. 6, followed by Broadway singer Karen Mason on Dec. 11.